Pope Francis: Catechesis on the Letter to the Galatians: 8. We are children of God 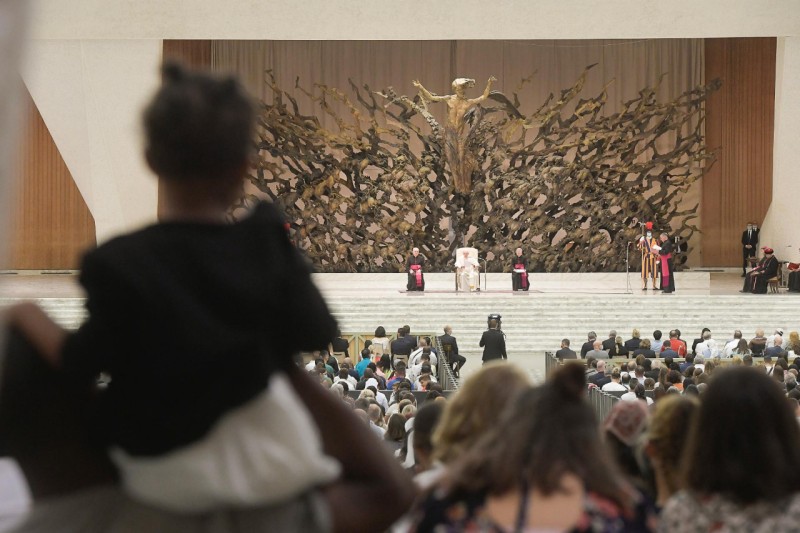 Catechesis on the Letter to the Galatians: 8. We are children of God

Let us continue our journey in deepening the faith – our faith – in the light of the Letter of Saint Paul to the Galatians. The Apostle is insistent with those Christians so they would not forget the novelty of God’s revelation that had been proclaimed to them. Completely in agreement with the evangelist John (cf. 1 Jn 3:1-2), Paul emphasises that faith in Jesus Christ has allowed us to truly become children of God and also his heirs. We Christians often take for granted this reality of being God’s children. Instead, it is good to remember with gratitude the moment in which we became such, the moment of our baptism, so as to live the great gift we received with greater awareness. If I were to ask you today, “which of you knows the exact date of your baptism?” I do not think there would be too many hands raised…. Yet, it is the day on which we were saved, it is the day on which we became children of God. Now, those who do not know it should ask their godparents, their dad, their mom, an uncle, an aunt: “When was I baptised”? And that day should be remembered each year: it is the day on which we became children of God. Agreed? Will you all do this? [Response from the crowd.] Eh, it is a so-so “yes”. [Laughter]. Let us proceed.

In fact, once “faith has come” in Jesus Christ (v. 25), a radically new condition was created that leads to divine sonship. The sonship of which Paul speaks is no longer a general one involving all men and women insofar as they are sons and daughters of the same Creator. No, in the passage we have heard, he affirms that faith allows us to be children of God “in Christ” (v. 26). This is what is new. This “in Christ” is what makes the difference. Not just children of God, like everyone: all men and women are children of God, all of them, regardless of the religion we embrace. No. But “in Christ”, this is what makes the difference for Christians, and this happens only by participating in Christ’s redemption, and in us in the sacrament of baptism: this is how it begins. Jesus became our brother, and by his death and resurrection he has reconciled us with the Father. Anyone who accepts Christ in faith, has “put on” Christ and his filial dignity through baptism (cf. v. 27). This is what it says in verse 27.

In his Letters, Saint Paul makes reference to baptism more than one time. For him, to be baptized was the same as taking part effectively and truly in the mystery of Jesus. For example, in the Letter to the Romans, he would even go so far as to say that in baptism we have died with Christ and have been buried with him so as to live with him (cf. 6:3-14). Deadwith Christ, buried with him so as to live with him. This is the grace of baptism: to participate in the death and resurrection of Jesus. Baptism, therefore, is not merely an external rite. Those who receive it are transformed deep within, in their inmost being, and possess new life, which is precisely what allows them to turn to God and call on him with the name of “Abba”, that is, “daddy”. “Father”? No: “daddy” (cf. Gal 4:6).

The Apostle audaciously confirms that the identity received with baptism is so completely new that it prevails over the differences that exist on the ethnic-religious level. That is, he explains it thus: “There is neither Jew nor Greek”, even on the social plain, “there is neither slave nor free, there is neither male nor female” (Gal 3:28). We often read these expressions way too quickly, without grasping the revolutionary value they possess. For Paul, to write to the Galatians that in Christ “there is neither Jew nor Greek” was equivalent to an authentic subversion in the ethnic-religious sphere. By the fact of belonging to a chosen people, the Jew was privileged over the pagan (cf. Rom 2:17-20).  – as the Letter to the Romans says, chapter 2, verses 17 to 20; Paul himself affirms this (cf. Rom 9:4-5). It is not surprising, therefore, that this new teaching by the Apostle could sound heretical. “What, everyone equal? We are different!” It sounds a bit heretical, doesn’t it? Even the second set of equalities, between those who were “free” and those who were “slaves”, introduced a shocking perspective. The distinction between slaves and free citizens was vital in ancient society. By law, free citizens enjoyed all rights, while the human dignity of slaves was not even recognized. This happens even today. There are many people in the world, many, millions, who do not have the right to eat, who do not have the right to education, who do not have the right to work. They are the new slaves. They are the ones who live on the margins, who are exploited by everyone. Slavery exists even today – let us think a little bit about this. Human dignity is denied to these people. They are slaves. Thus, finally, equality in Christ overcomes the social differences between the two sexes, establishing an equality between man and woman which was revolutionary at the time and which needs to be reaffirmed even today. This needs to be reaffirmed even today. How many times we hear expressions that denigrate women! How often we hear: “But no, do not do anything, those are women’s concerns”. But, look, men and women have the same dignity. And it has happened in history, even today, a type of slavery of women: women do not have the same opportunities as men. We have to read what Paul says: we are equal in Christ Jesus.

As we can see, Paul confirms the profound unity that exists between all the baptized, in whatever condition they are bound to, whether men or women – equal because every one of them is a new creature in Christ. Every distinction becomes secondary to the dignity of being children of God, who, through his love, creates a real and substantial equality. Everyone, through Christ’s redemption and the baptism we have received, we are all equal: children of God. Equal.

Brothers and sisters, we are, therefore, called in a more positive way to live a new life that roots its foundational expression in being children of God. Equal because we are children of God; and children of God because Christ redeemed us and we attained this dignity through baptism.It is decisive even for all of us today to rediscover the beauty of being children of God, to be brothers and sisters among ourselves, because we have been united in Christ, who redeemed us. The differences and contrasts that separation creates should not exist among believers in Christ. And one of the apostles, in the Letter of James, says this: “Be aware about differences, because it is not right that when someone enters the assembly (that is, the Mass) wearing a gold ring and well-dressed, ‘Ah, come up here, up here!’, and you give him one of the front seats. Then, if someone else enters, obviously poor, who can just about cover himself and you see he is poor, poor, poor, ‘Oh, yeah, you can go over there in the back’.” We create these differences, many times unconsciously so. No, we are equal! Rather, our vocation is that of making concrete and evident the call to unity of the entire human race (cf Conc. Ecum. Vat. II, Cost. Lumen gentium, 1). Everything that exacerbates the differences between people, often causing discrimination – all of this, before God, no longer has any basis, thanks to the salvation effected in Christ. What is important is that faith that operates according to the path of unity indicated by the Holy Spirit. And our responsibility is that of journeying decisively on along this path of equality, but an equality that is sustained, that was created by the redemption of Jesus. And do not forget when you go home: “When was I baptized?” Inquire about out so as to always have the date in mind. And when the date comes, it can be celebrated. Thank you.

New Year’s Day will be celebrated in Ethiopia this coming 11 September. I extend to the Ethiopian people my most cordial and heart-felt greetings, particularly to those who are suffering due to the ongoing conflict and the serious humanitarian situation it has caused. May this be a moment of fraternity and solidarity so that the common desire for peace can be heard.

I cordially greet the English-speaking faithful. My thoughts turn especially to young people returning to school in the coming weeks. Dear young people, may this academic year be for all of you a time of educational growth and deepening of the bonds of friendship. Upon you and your families I invoke the wisdom and joy of our Lord Jesus Christ. God bless you!

Summary of the Holy Father’s words:

Dear brothers and sisters, in our continuing catechesis on the Letter to the Galatians, we now consider Paul’s teaching on the radical newness of our life in Jesus Christ. By his incarnation, death and resurrection, the Son of God has reconciled us with the Father, given us birth to new life and bestowed on us a share in his divine sonship. Through faith and baptism, we have been interiorly transformed; now, having “put on Christ”, we have become a new creation. This new identity transcends all other ethnic, social and religious differences: in Christ, “there is no longer Jew or Greek, slave or free, male or female” (Gal 3:28). We Christians can often take for granted this newness of life bestowed at our baptism. Conscious of our dignity as sons and daughters of the Father, may we resolve to reconcile every division, to embrace fully our oneness in Christ and our vocation to be convincing witnesses of the unity to which, in God’s saving plan, the entire human family is called (cf. Gaudium et Spes, 1).

Pope at Audience: Take time to reflect on how we live our faith

Cardinal Grech: Bishops to engage all the faithful in the Synod

Cardinal Grech: Bishops to engage all the faithful in the Synod

The Redemptorist Province of Vietnam has 8 newly-ordained priests and 8 deacons.

“Saint Alphonsus and the Immaculate Conception”

Message from Fr. General for the Solemnity of Immaculate Conception